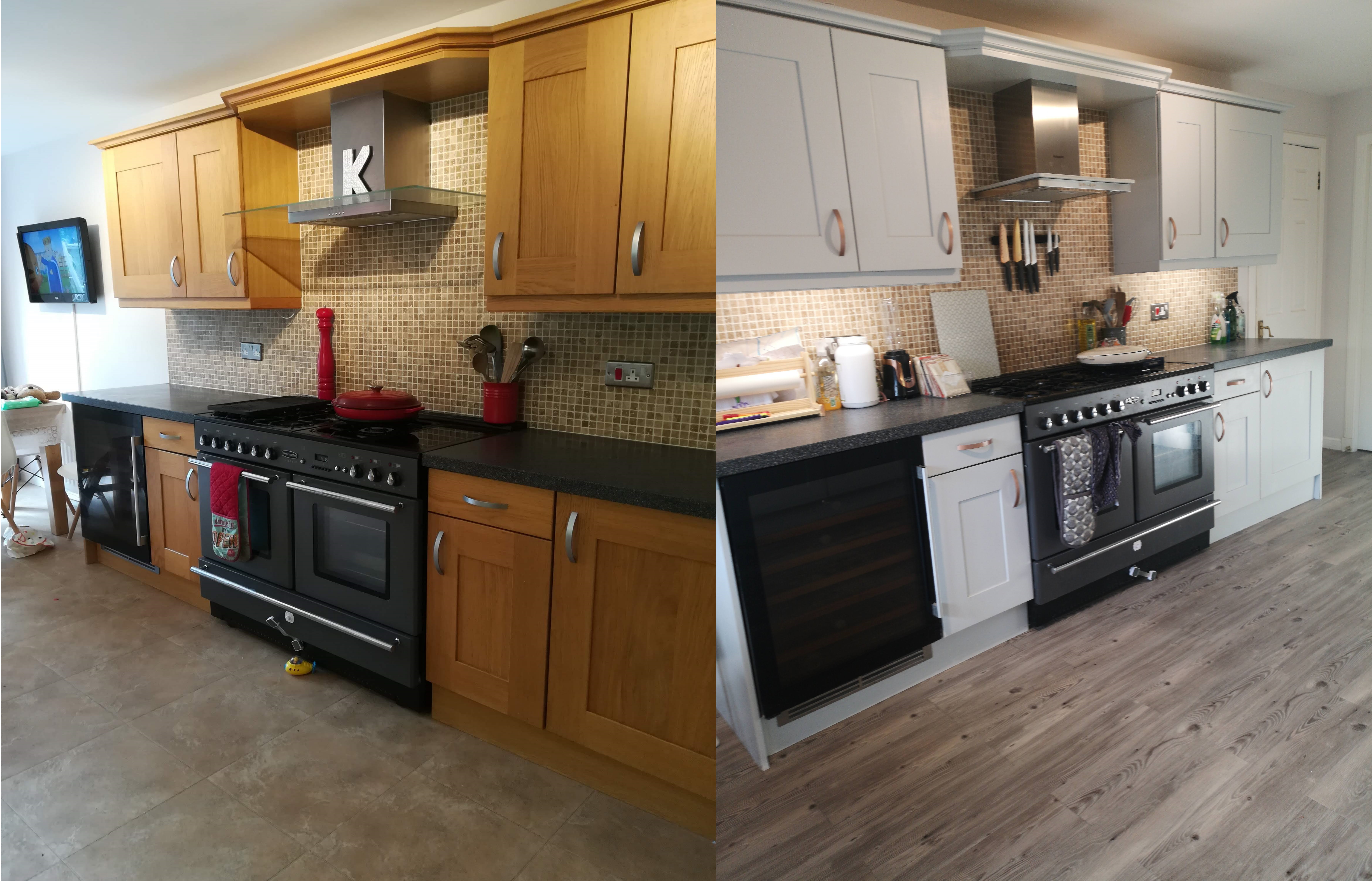 Last summer we did a cheap kitchen renovation but this blog post about it has been seriously delayed because I was waiting for the kitchen to be immaculately clean and tidy to take perfect ‘after’ photos. Well, turns out, with 2 pre-school children and a dog I would be waiting forever for that day so I have just bitten the bullet and here we are: the story of our cheap kitchen renovation.

We moved into our current home in the summer of 2017. It was clear that the previous owners had spent a large amount of money on the kitchen – there was a Rangemaster cooker and the units are solid oak. The flooring was Karndean luxury vinyl tiles. In theory, that sounds lovely, right?

Well, let’s start with what I love about the kitchen: the Rangemaster is fabulous and having two ovens is really useful, especially on Christmas day. I also love the size of the kitchen, our last kitchen was tiny so I really appreciate the space.

And…. well, that’s it. I really couldn’t stand pretty much anything else about the kitchen. The oak units were a really warm, yellowy tone, which as a lover of neutral interiors, was not to my taste at all. The flooring was textured and there were gaps between the tiles which meant that they filled up with grime really easily and the only way to make the floor look remotely clean was to get down on my hands and knees and give it a scrub with a brush, Cinderella style. I would do this horrible task once every couple of weeks and dreaded it because it was exhausting, dirty and took over an hour.

This picture shows the horrible tiles pretty well – yes, that is dirt:

This might sound ridiculous but the kitchen was really bringing me down and I would really get anxious about the state of the floor, especially with two little children and a dog – I just couldn’t keep on top of the grime and I dreaded having visitors around.

After living with it for two years, we finally decided in the Summer of 2019 to make some changes. We didn’t really set a budget other than vowing to spend as little as possible – a whole new kitchen was out of the question budget-wise. I owe a huge debt to my husband for once again believing in my vision and trusting it would turn out well – without him being on board I would never have done my cheap kitchen renovation.

The first place we started was of course the floor. We had a look around some flooring stores and got some quotes and it was estimated that to replace the vinyl tiles with new, better ones would cost well over £2,000… so that was out of the question. I had read excellent things about self adhesive vinyl flooring and I had previously used the wood effect planks available from B&M in our en-suite so I knew that this was going to be a great option – we ended up buying more of the same, in a slightly different shade of grey this time.

They were so easy to put down – we just put them down on top of the existing flooring, after giving it one last scrub to remove any dirt. My top tips when putting down vinyl planks would be to work in rows rather than columns (i.e. put them down short end to short end) and to obviously stagger the planks so the ends don’t line up. You can cut them with a Stanley knife or even a sharp pair of scissors. As long as your subfloor is pretty flat and clean and dry, I would honestly say that laying them is truly foolproof!

We ended up using 20 packs (as we have a large kitchen and we also ran them through to the adjoining utility room). So that’s only £180 for a whole new floor for a huge area! It has made such a difference to the kitchen and the best thing is that it is so easy to keep clean.

One thing I would say is that we found that each B&M store only ever had about 4/5 packs of each colour of vinyl planks in stock, which meant we had to drive around multiple stores so get all 20 packs. We probably spent more time in the car than we did actually laying the floor! If I was to do it all over again, I think instead I would just bulk order this highly-rated flooring from B&Q which looks similar and is only slightly more expensive per metre squared.

The next thing we did was paint the kitchen units. Not going to lie, this part was terrifying: what if it all went wrong? What if I chose the wrong colour?

I can honestly say I spent 10+ hours doing online research and I determined that the best paint (that didn’t require a primer) was the V33 Renovation range of paints. They are not the cheapest, but they get rave reviews online. I opted for Loft Grey which was a pretty scary decision as my local B&Q didn’t have any tester pots. So it was with baited breath that I began painting the units (after cleaning them with sugar soap and making sure they were fully dry). I know that lots of kitchen cabinets are laminate, I found this great blog post with tips on how to paint laminate cabinets so it lasts.

The paint went on really well but it did need 3 coats because my units were a pretty intense colour, you’d probably get away with two coats with lighter units. I applied the first two coats with a brush and the final coat with a little foam roller. The 2 litre tub of paint just did 3 coats – I have a tiny bit left over in a tub for any future touch ups. I was really impressed by this as we have a lot of units.

I didn’t bother removing the units from the hinges, I just painted them in situ. Apart from having to be careful around the hardware, this worked out well and saved me a lot of work.

The final step in the process was updating the stainless steel handles on the kitchen doors. I wanted them to be copper/rose gold because I felt like making them a warm metal colour would better tie the whole look together as the splashback tiles are a warm beige colour and I felt like there needed to be another warm element in the room (all those grey tones was really cooling things down).

Unfortunately I couldn’t find any suitable yet affordable handles. I considered spray painting them but wasn’t convinced the paint would stand up to daily handling. So, I had to think of another way of upcyling my existing cabinet handles. I eventually had a brain wave… which I must confess, I wasn’t convince would a) look good or b) last the test of time. But for the sake of spending under £10 I thought it was worth a shot.

I bought some copper-coloured Fablon/contact paper which I cut to size (enough to cover the length of each handle and to wrap around the back. I then placed it over the handle and pointed a hot hairdryer at it, which ‘melted’ the copper film around the edge of the handle. I then trimmed off any excess. Warning: be careful, the metal obviously heats up and you could burn yourself.

I am so pleased with the outcome – the handles look great and 8 months on, there is no sign of wear and tear. I think in the long term I would still like to replace the handles, but I can totally live with my upcycled handles for the next few years.

Overall, our cheap kitchen renovation cost us under £250: £180 on flooring, £36 on paint and £10 on Fablon, plus a bit extra for the paint brush and roller. This truly was a budget kitchen makeover. I can’t believe the difference, the room looks so much bigger and brighter and more modern. It really is the kitchen of my dreams now and I still grin from ear to ear every time I walk into the room.

3 thoughts on “Cheap Kitchen Renovation: how I transformed my kitchen for under £250”