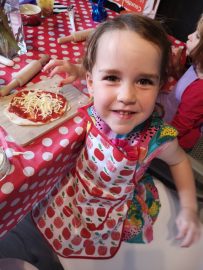 I’m not really sure how Lauren came up with the idea for having a birthday pizza party when her 4th birthday rolled around, but if I had to guess, Peppa Pig, Blaze & The Monster Machines or Paw Patrol must have had something to do with it. We knew it was going to be hard to top Lauren’s 3rd birthday party so we decided to do something totally different this year. We were keen to host it again at home (as we have worked very hard to create a lovely garden to entertain in) but instead of inviting her whole nursery class we asked Lauren to select a few close friends. This kept things more manageable and meant it would be easier to pick an activity – in this case, making pizzas. If you stumble upon this post because you are also planning a birthday pizza party for kids, I hope you find some inspiration.

The pizza theme began at the invitation stage (when we pick a theme, I commit hard). I thought of a cute idea – making dinky pizza-shaped invitations and delivering them in a mini pizza box.

Adorable, right? I must admit, I was rather proud of these and received some great feedback. I was slightly concerned that the party had peaked at the invitation stage, but I needn’t have worried.

When it came to preparing the party bags for the big day, I ordered each attendee a Curious George and the Pizza Party book. I also ordered a pack of wooden mini rolling pins which I then added each child’s name to using my pyrography kit. Here’s how they came out:

Definitely very, um, rustic looking but the kids loved them. The great thing is they had 3 purposes – 1) they acted as name cards at the table, 2) the kids used them to roll out their pizzas and 3) they were able to take them home with them as a party favour, hopefully to be used again many times. Everyone then went home with their book, rolling pin (and a slice of cake) in a canvas bag – I was very happy that there was very little single use plastic at the party.

The night before the party, we prepared toppings for the pizzas – we gave each child a cup with a small amount of tomato pizza sauce, a spoon to spread it around with, and a ramekin of mozzarella cheese. This made sure they didn’t go totally overboard with these as a pizza with too much on top of it doesn’t cook well. We then had a variety of toppings in the middle for the kids to help themselves – ham, goats cheese, mushrooms, sweetcorn, olives and peppers. We didn’t go too overboard as 4 year olds aren’t known for their adventurous palate! The sweetcorn and the ham were the biggest hits by far.

At the start of the party, to keep the kids busy and to work up their appetite whilst everyone arrived, I gave them a little simple treasure hunt to do. I printed out a picture of a pizza, cut out the slices and laminated them. I then hid them in the garden for the kids to find. They absolutely loved this and it was hard dragging them inside to make their pizzas!

Once all the guests were here, the pizza making began. The kids sat down at the table and donned a apron and chef’s hat. I had already made the dough earlier that day, and each child was given a ball of dough to roll out and apply their toppings to – I coached them through this, They all needed a little help with the rolling to make sure the base was thin enough but I was so impressed with their pizza making skills – perhaps they could go into business in 20 years’ time? You could hear a pin drop whilst they were creating their culinary masterpieces, they were so focused and it was absolutely adorable. They all had a little wooden board to make their pizzas on which I had added flour to in advance to stop the pizzas from sticking. This also acted as a plate to eat off so there wasn’t too much washing up to do at the end of the party.

As each child finished their pizza, they added a little flag on a toothpick with their name on it (to make sure the pizzas didn’t get mixed up) and carefully carried it outside to the pizza chef aka daddy. Most of the party was on a bit of a budget but the pizza oven itself was definitely not! My husband recently received his annual bonus and whilst most of it went on paying down loans we agreed to splurge on an Ooni Koda pizza oven. We have already used it 5 or so times and it is absolutely brilliant. We love entertaining and it’s nice to have another outdoor option instead of barbecues. It was the perfect addition to a birthday pizza party for kids. The pizzas cook in under a minute so the kids weren’t waiting long.

Here’s the proud birthday girl showing off her hard work:

The pizzas were cut up and devoured – I’ve never seen so little food left. There is definitely a link between kids being involved in the cooking process and how much they then go on to eat.

Whilst this was a pizza party for kids, we knew there would be a fair few adults there, so we then cooked a few pizzas for the grown ups to enjoy. To ensure we didn’t spend the whole party cooking we had rolled out and parbaked a few bases in the Koda the night before, which just meant we could throw on some toppings. Everyone was so impressed with the Koda and I reckon Ooni will get a couple of sales on the back of the party!

For the rest of the party, the girls enjoyed running around, dancing and playing pass the parcel. We also had a piñata which was a big hit, if you’ll excuse the pun. We had considered making our own pizza-shaped piñata but with two small kids… ain’t nobody got time for that, so we bought one from Tesco.

Overall, it was a brilliant party and we feel very lucky to have such a great daughter who has made such lovely friends. We are also very grateful that the weather forecast was totally wrong and that we were able to be outside so much. I can highly recommend a birthday pizza party for kids as a theme. Happy Birthday Lauren!